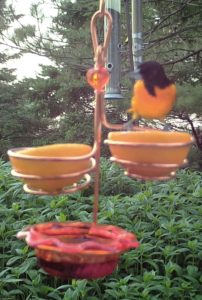 *Oriole’s are protected by law covering all migratory bird species, and, since 1975, by the State’s Nongame and Endangered Species Conservation Act (Chapter 27, Acts of 1975).

*Recently the Baltimore Oriole was combined with the western Bullock’s Oriole as a single species, the Northern Oriole. When trees were planted on the Great Plains, the two forms extended their ranges and met. Despite the differences in appearance, it was found that they interbred, and that most birds in the central plains were hybrids, so the birds were combined into a single species. Now, it seems that in some places the birds are choosing to mates of their own type, and they are considered separate species again. 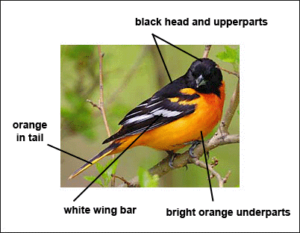 Voice: Clean and flute-like whistled single or double notes in short, deliberate whistles and chattering sounds high in the treetops

Habitat: Deciduous woodlands and shade trees. Before the decline, the American elm was a favorite nesting site for the eastern bird.

Placement: Place your feeder out in the open so it can be seen by the birds. Use a feeder hook if an open branch is not available.

All of these birds have a strong sweet tooth, and they prefer foods that offer not only the proper nutrition, but also have a touch of sugar. Popular oriole foods include: